I have a new book! It goes on sale 3.26.2019. Meanwhile, you can admire my Kubrick-esque filmmaking skills. 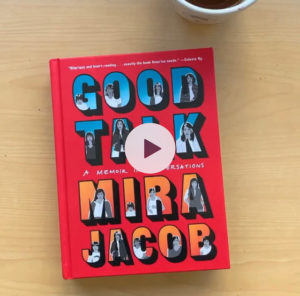 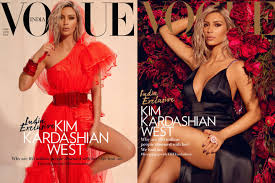 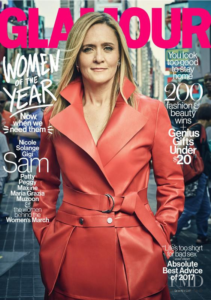 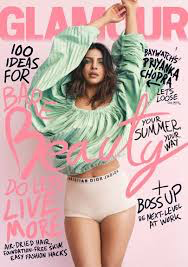 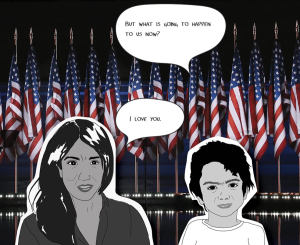 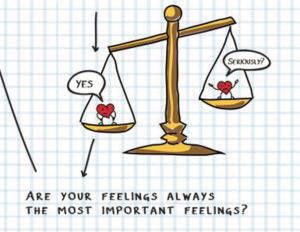 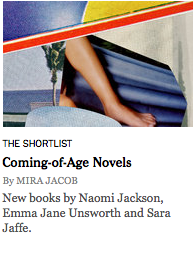 The 2014 lists are in and The Sleepwalker’s Guide to Dancing can be found on Kirkus’ Best Books, Boston Globe Best Books, Goodreads Best Fiction, Bustle’s Best Fiction and BuzzFeed’s 22 Most Exciting Literary Debuts!

The Debut Novelist Residency for Writers & Books in Rochester! BEST. WEEKEND. EVER. 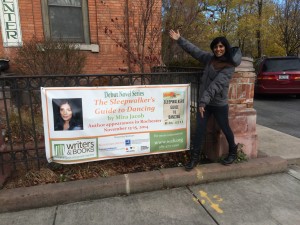 The Sleepwalker’s Guide to Dancing has been nominated for a 2014 Goodreads Choice Award!

10.21.14
Big news from India: The Sleepwalker’s Guide to Dancing has been nominated for the Tata First Literature Award!
10.15.14 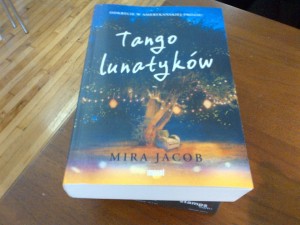 The Polish translation is out!
10.12.14
From the Asian Review of Books:
Like the familiar cycle of life itself, circumstances change and individual characters fortunes rise and fall. The book ends poignantly, but on a note of hope. Reading about the Eapens’ struggle with, among other issues, the tension between loyalty to one’s parents and to oneself, or the festering of an unresolved family misunderstanding causes the reader to review her own relationships, while never feeling bogged down by the storyline. To the contrary, this reviewer read in a few pleasurable sittings a book that took Jacob ten years to write.
10.08.14
The Cleveland Plain Dealer gives an “A” to the audiobook version of The Sleepwalker’s Guide to Dancing, which is narrated by Mira.
10.03.14

The Hindu calls The Sleepwalker’s Guide to Dancing, “A masterly portrayal of pain, both physical and emotional” and goes on to say “Relationships and their complexities are tackled with grace and dignity; the father-daughter bond that gets stronger when Amina moves back in to Albuquerque temporarily tugs at your heart. In Kamala’s never-say-die attitude, we recognise the eternal continuity of life; in conversations between Amina and Akhil, we think of our own siblings and our foolishness at how, more often than not, we take life for granted.”

From The Boston Globe:

“Moving forward and back in time, Jacob balances comedy and romance with indelible sorrow, and she is remarkably adept at tonal shifts. When her plot springs surprises, she lets them happen just as they do in life: blindsidingly right in the middle of things. She also makes some dicey bits of her basic setup — a brain surgeon with something awry in his head, a photographer who closes her eyes to what’s right in front of her — seem not overly obvious but inevitably human.”

The Sleepwalker’s Guide to Dancing makes the Asian Age Bestseller list in India! Rights have sold in Turkey! And over the last few weeks, these reviews have come in:

From the Kansas City Star:

“For a novel that spans continents, cultures and decades, Jacob never loses the core of those familial connections, and she has a knack for surprising readers with glimpses of gentleness and vulnerability in even the most unforgiving scenes and characters. “The Sleepwalker’s Guide to Dancing” is a rich, engrossing debut told with lightness and care, as smart about grief as it is about the humor required to transcend it.”

“Notions of connection and rupture, voyeurism and secrecy are expertly threaded through this luminous novel, where comedy and sadness are uniquely conjoined and where even food, lavishly depicted in Jacob’s trademark melodic prose, is like a secret language.”

“Told with humor and sympathy for its characters, the book serves as a bittersweet lesson in the binding power of family, even when we seek to break out from it.

“…uncommonly easy to like, right from the first pages.”

“This is a book for any and everyone.”

“The Sleepwalker’s Guide to Dancing is that rare novel that manages to evoke mirth and tears simultaneously.”

As you look at Jacob’s novel through Amina’s camera, ordinariness turns extraordinary, so much so that you may even find a ghost on the edge of a photo. In Jacob’s New Mexico, the dead and the living splendidly come alive.”

“Told from the perspective of Amina—daughter of Thomas and Kamala Eapen, who moved from Salem, in Tamil Nadu, to Albuquerque, in the US, half a century ago—Jacob’s novel harks back to an illustrious line of stories on the Indian diaspora in North America. From Bharati Mukherjee’s prickly family dramas to the delicious rituals of cooking and eating in Chitra Banerjee Divakaruni’s novels to Jhumpa Lahiri’s hawk-eyed attention to everyday detail, a range of influences are brewed into a potent concoction in The Sleepwalker’s Guide To Dancing, then blended with the comic energy of a Woody Allen movie and the tragic intensity of Arundhati Roy’s The God Of Small Things.”

“Dazzling and irreverent, witty and profound, this is a family saga of the most engaging kind: heartbreaking, hopeful, and alive on the page — which is why we had to make it one of our Summer 2014 Discover Great New Writers selections.” 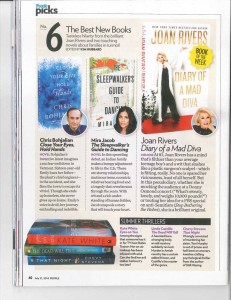 “In this sprawling debut, and Indian family makes a bumpy adjustment to life in the U.S. There are stormy relationships, mutinous teens, eccentric relatives bearing food and a tragedy that reverberates throughout the years. With wit and a rich understanding of human foibles, Jacob unspools a story that will touch your heart.”
—People

Last week’s interview with Leonard Lopate is now up!

From AP:
“Even as it deals with weighty, dark subjects like loss and grief, and the struggles of an immigrant family, Jacob’s novel is light and optimistic, unpretentious and refreshingly witty. Jacob has created characters with evident care and treats them with gentleness even as they fight viciously with each other. Her prose is sharp and true and deeply funny. The book is 500 pages long and had I the luxury of time I would have read it in one sitting. This is the literary fiction I will be recommending to everyone this summer, especially those who love multigenerational, multicultural family sagas.”

From Entertainment Weekly:
“This debut novel so fully envelops the reader in the soul of an Indian-American immigrant family that it’s heart-wrenching to part with them. …[T]hanks to Jacob’s captivating voice, which is by turns hilarious and tender and always attuned to shifts of emotion, her characters shimmer with life. A-“

From Livemint:
“Told from the perspective of Amina—daughter of Thomas and Kamala Eapen, who moved from Salem, in Tamil Nadu, to Albuquerque, in the US, half a century ago—Jacob’s novel harks back to an illustrious line of stories on the Indian diaspora in North America. From Bharati Mukherjee’s prickly family dramas to the delicious rituals of cooking and eating in Chitra Banerjee Divakaruni’s novels to Jhumpa Lahiri’s hawk-eyed attention to everyday detail, a range of influences are brewed into a potent concoction in The Sleepwalker’s Guide To Dancing, then blended with the comic energy of a Woody Allen movie and the tragic intensity of Arundhati Roy’s The God Of Small Things.”

From Bustle:
“Mira Jacob makes a resounding entrance onto the literary stage with her first novel The Sleepwalker’s Guide to Dancing. It’s a bold debut with a powerful pulsing heart in which Jacob freshly captures the complexities of the Indian immigrant experience. The book is at once a messy, joyous, painful, and tender portrait of modern family life illustrated through the eyes of Amina Eapen and the complicated characters of her Indian-American family.

From Hello Giggles
Mira Jacob is one of those writers who lives so deeply inside everything that it is to be human and whose eye and ear for perfect details will make you laugh and nod and cry and just feel the feels like a giant breathless wallop to your heart. In this, her big, sprawling debut novel, Jacob explores one family’s journey from ’70s India to ’80s New Mexico to ’90s Seattle and everything that happens to all of them in between. It is a story about bonds and family and love and death and it is a story you should definitely read.”

From Shelf Awareness:
“Debut novelist Mira Jacob weaves a complex, layered saga of the immigrant experience, deftly illuminating the Eapens’ ambivalence toward their homeland. Heartbreaking and often surprisingly funny, The Sleepwalker’s Guide to Dancing is a testament to the deep bonds of family and the importance of gaining the courage to move on.”

The July Kirkus issue features a lovely,  in-depth article by Megan Labrise on the process writing The Sleepwalker’s Guide to Dancing. 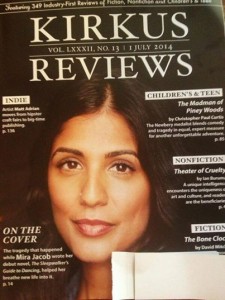 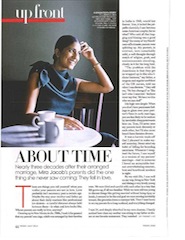 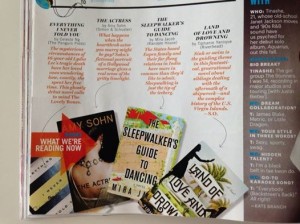 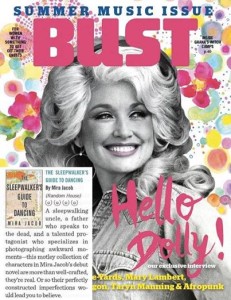 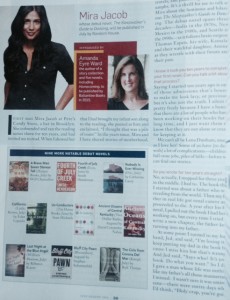 Starred Review from Kirkus!! “Jacob’s darkly comic debut—about a photographer’s visit to her parents’ New Mexico home during a family crisis—is grounded in the specifics of the middle-class Indian immigrant experience while uncovering the universality of family dysfunction and endurance…. Comparisons of Jacob to Jhumpa Lahiri are inevitable; Lahiri may be more overtly profound, Jacob more willing to go for comedy, but both write with naked honesty about the uneasy generational divide among Indians in America and about family in all its permutations.”

From Booklist: “This atmospheric behemoth of a book, Jacob’s ambitious first novel, follows the fortunes of the Eapens, an Indian American family dealing with tragedy and loss…. That the past is always present in their lives provides a dramatic tension that at once brings them together and threatens to drive them apart. Jacob has done an excellent job of balancing these elements as she has created a memorable and dramatic portrait of a family in flux.”

Publisher’s Weekly calls The Sleepwalker’s Guide to Dancing “an emotionally bountiful debut,” adding, “The author has a wonderful flair for recreating the messy sprawl of family life, with all its joy, sadness, frustration, and anger” and, “[T]he novel, through its lovingly created and keenly observed characters, makes something new of the Indian immigrant experience in America.”

Everybody is Looking for Someone Like You  up at PEN/ Guernica today!

Pierogis and vodka for all! The Sleepwalker’s Guide to Dancing will be published in Poland and Russia.

Thrilled to announce The Sleepwalker’s Guide to Dancing has been picked as a B&N Summer 2014 Discover Great New Writers selection.

L’Chaim! Kinneret-Zmora in Israel has bought The Sleepwalker’s Guide to Dancing.

Bloomsbury Press has designed this lovely cover for the UK and India release.

The book is also forthcoming in 2014  from Eichborn Verlag in Germany, Actes Sud in France, People’s Press in Denmark, Neri Pozza in Italy, and Kinneret-Zmora in Israel.

Reviews for The Sleepwalker’s Guide to Dancing:

“Debut novelist Mira Jacob reveals how a tragedy that happened while writing The Sleepwalker’s Guide to Dancing helped her breathe new life into the book” by Megan Labrise, Kirkus Reviews